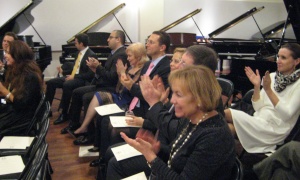 At this corporate holiday party for two partnering firms, IBS Group and Luxoft enjoyed Russian piano selections performed for a largely Russian audience of executives. Surrounded by beautiful pianos in the elegant Faust Harrison showroom, guests were treated to wines that were chosen from regions as diverse as the moods of the music, and paired with the music based on a variety of themes. A Reisling from upstate NY was described as refreshingly crisp by Sommelier, Elizabeth Miller, who explained that its grapes thrived on the the cool misted air flows that frequently blew off the deceptively deep and seldom-warm waters of Seneca Lake. That imagery inspired the Reisling to be paired with a haunting piece that Elaine Kwon introduced simply as a “Rachmaninoff prelude.” Elaine’s brilliant, short performance of the piece seemed to channel the description with gripping accuracy. During the discussion that followed the tasting and performance, a member of the audience noted that the misty image reminded him of his time on Seneca Lake when he attended Hobart college, which overlooks the lake�s North end. Though a unique connection to the area led to his comments, several other guests admitted that they too were imagining a fog rolling in as they listened to the hypnotic tones. We�re told that shared experience flowed into follow-up discussions between guests for weeks to come. We�re also told that these types of spontaneous situations are not rare at these Savor events as the combination of wine, music and conversation often trigger memories and unforeseen connections.